Here’s an image of the seat pattern on Easyjet aircraft, which I stared at for an hour or so while sleep deprived yesterday: 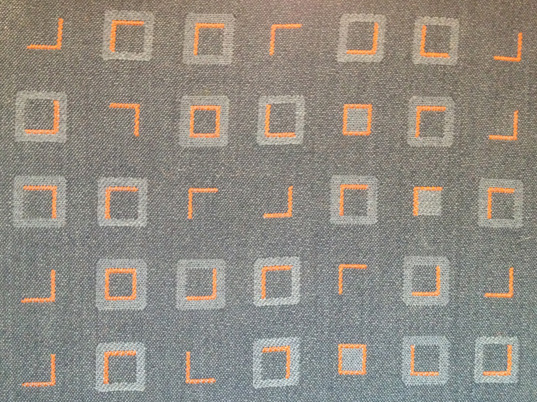 It’s been carefully designed to be maximally annoying to whatever kind of stupid brain I have, in that pretty much every element of the pattern almost but doesn’t quite repeat. Actually the segment in the photo isn’t too bad, but the bit I had in front of me had the ‘L’ shape appearing in three of the possible orientations but not the fourth one, and no ways to make larger squares using the grey squares as the corners, and some other incredibly frustrating feature that I have thankfully now forgotten.

Anyway this pattern ruined any chance I may have had of a good nap, but it did make me hazily realise that whatever this mental mode is is one of the key elements of my cognitive style, for better or worse. I normally label it as ‘synthesis’, which sounds kind of grand, but what I really mean is just this thing of idly mashing little bits of conceptual pattern together in a semi-conscious, automatic way, over and over and over until I maybe get something I can use.

It has a pretty similar subjective flavour to having an annoying tune or a bunch of odd word fragments stuck in your head, which is also something that I have going on all the sodding time.

OK, I’m maybe not selling this skill as an enjoyable one here, but actually I have a lot of affection for it. Whatever this skill is, it somehow manages to balance out my terrible ability at conscious rule-following and gives me a way to survive in mathematics.

One thought on “sleep deprivation, part 1”