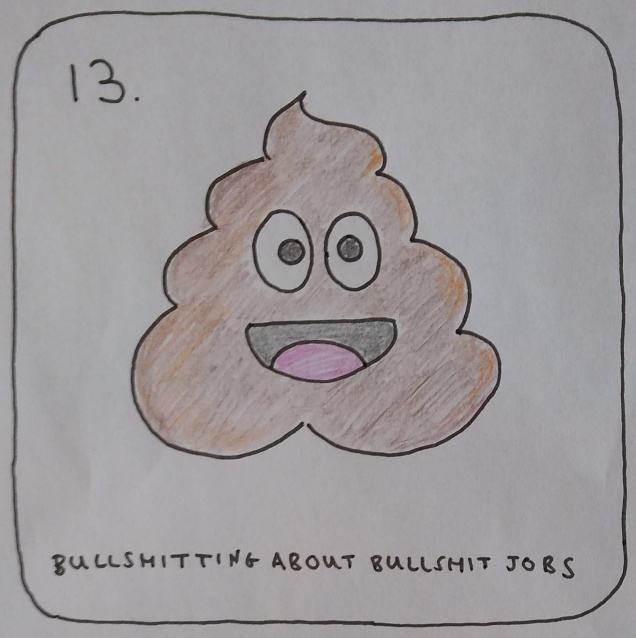 Today’s topic is bullshit jobs. I’ve done no preparation for this beyond a reread of David Graeber’s essay, On the Phenomenon of Bullshit Jobs: A Work Rant. This piece was enormously popular when it came out in 2013, so presumably there’s a large secondary literature of commentaries and follow-ups. I haven’t read any of it, this is me just bullshitting from first principles. So I’m probably repeating a lot of obvious talking points.

Rereading the article, a couple of things jumped out straight away:

So, I’ll briefly go over his thesis. Advances in productivity and automation should have freed up lots of time by now, and we should have got the 15 hour working week that John Maynard Keynes expected. But clearly we haven’t. Graeber rules out the consumer treadmill as an explanation:

The standard line today is that he didn’t figure in the massive increase in consumerism. Given the choice between less hours and more toys and pleasures, we’ve collectively chosen the latter. This presents a nice morality tale, but even a moment’s reflection shows it can’t really be true. Yes, we have witnessed the creation of an endless variety of new jobs and industries since the ’20s, but very few have anything to do with the production and distribution of sushi, iPhones, or fancy sneakers.

Instead, he points the finger at what he describes as whole new classes of jobs:

… rather than allowing a massive reduction of working hours to free the world’s population to pursue their own projects, pleasures, visions, and ideas, we have seen the ballooning of not even so much of the ‘service’ sector as of the administrative sector, up to and including the creation of whole new industries like financial services or telemarketing, or the unprecedented expansion of sectors like corporate law, academic and health administration, human resources, and public relations. And these numbers do not even reflect on all those people whose job is to provide administrative, technical, or security support for these industries, or for that matter the whole host of ancillary industries (dog-washers, all-night pizza delivery) that only exist because everyone else is spending so much of their time working in all the other ones.

These are what I propose to call ‘bullshit jobs’.

It’s as if someone were out there making up pointless jobs just for the sake of keeping us all working.

So, in this view there are a bunch of jobs that are bullshit. Here’s another sample list further down:

A world without teachers or dock-workers would soon be in trouble, and even one without science fiction writers or ska musicians would clearly be a lesser place. It’s not entirely clear how humanity would suffer were all private equity CEOs, lobbyists, PR researchers, actuaries, telemarketers, bailiffs or legal consultants to similarly vanish.

It’s not very satisfying to me to leave this at the level of a big binary list of jobs that are bullshit (telemarketers, corporate law) and jobs that are not (teachers, tube drivers). To my mind the bullshit is much more fractally distributed throughout the whole economy. It’s definitely true that some jobs are much more prone to gathering bullshit than others. But most of the ‘bullshit’ jobs Graeber lists serve some useful functions. I’m not sure what he’s got against actuaries – insurance seems like a reasonable thing to me, and somebody needs to work out how much it should cost. And some level of financial and legal work needs to go on. (Some of these I do find hard to defend at all. I think telemarketing might actually be pure bullshit given a narrow enough definition? Does anyone need to bother other people by phone any more? I mean I really hate phones so I could be biased here, but that does sound like bullshit to me.)

At the other end of the scale, a lot of his ‘non-bullshit’ jobs get mixed up with bullshit too. Teachers are always having to grapple with the latest bullshit government initiative, for example. The bullshit is mixed right through everything.

I want to probe a bit deeper into what factors are upstream of jobs becoming bullshit. There definitely seem to be warning signs for bullshit. For a start, jobs are particularly likely to contain a lot of bullshit if they contain a lot of abstraction layers. For example:

These aren’t bad things intrinsically, they need to happen to some extent or we’d all be stuck individually bartering potatoes all day. But they provide places for the bullshit to get in.

For the rest of this post I’m going to play with one potential taxonomy of bullshit jobs. This isn’t supposed to be a Grand Unified Theory of Bullshit Jobs, it’s just me playing around. I don’t have time to try multiple taxonomies in a notebook post like this, so if this one turns out to not be very insightful then I just have to deal with that I suppose. Anyway, it’s inspired by Frankfurt’s characterisation of bullshit in his classic On Bullshit:

It is impossible for someone to lie unless he thinks he knows the truth. Producing bullshit requires no such conviction. A person who lies is thereby responding to the truth, and he is to that extent respectful of it. When an honest man speaks, he says only what he believes to be true; and for the liar, it is correspondingly indispensable that he considers his statements to be false. For the bullshitter, however, all these bets are off: he is neither on the side of the true nor on the side of the false. His eye is not on the facts at all, as the eyes of the honest man and of the liar are, except insofar as they may be pertinent to his interest in getting away with what he says. He does not care whether the things he says describe reality correctly. He just picks them out, or makes them up, to suit his purpose.

The main feature of bullshit, as Frankfurt explains it, is that it is indifferent to the truth, rather than outright false. It’s produced as a side effect of some other self-serving process.

This already ties in quite well with the idea of bullshit seeping through abstraction layers. Abstraction layers tend to be places where caring breaks down – it’s just easier to care about potatoes than financial derivatives. In my taxonomy I’m going to explore three kinds of not caring:

I’ll go through the eight options. First there’s the Platonic ideal of a non-bullshit job:

Then we get into the region of somewhat bullshit jobs:

None of these seem like the canonical bullshit job to me, but they are definitely likely to contain bullshit elements. Then we get towards the real bullshit:

Then finally we get to:

I’ll try it on one real example, that job I did where I walked around hospitals measuring things:

There were two hospitals being merged together on a new site, and the project management office needed to collect data on how much storage space the new hospital would need for medical supplies. I’m not sure what the best way of doing this would be, but maybe it would involve, I don’t know, some Fermi estimates based on their current storage requirements, plus some efficiencies for the single site. What they actually did was make a giant spreadsheet of every sort of item ordered by the hospital (bandages, prosthetics, tiny orthopaedic screws) and then employ EIGHT OF US to go round the hospitals with tape measures FOR WEEKS tracking down and measuring every individual item on the list, including the tiny orthopaedic screws.

If that doesn’t score highly on the bullshitometer then something is really up.

So… the original problem, ‘how much storage space do we need’, is a good one, and presumably somebody somewhere really cared about the answer. Once this had been filtered through a couple of management layers and subcontractors most of the caring had been lost. I’ll give it a generous half a point.

Definitely nobody cared whether the solution could possibly fix the problem. Zero points.

Incentives were also awful. The work had been contracted out through a couple of layers, and the people who had to find the answer had no particular reason to care beyond coming up with a number that kept the layer above happy. Zero points again.

So I make that 0.5/3. Definitely a bullshit job. So it passes this basic sanity check. (Not a great one, as I’d have had exactly this example at the back of my mind when I came up with the criteria!)

So… was that particulary taxonomy any good? Not particularly, but it did get my thinking through the space of possibilities. I do think that the general strategy of looking for places where not-caring gets in is a good one for spotting bullshit.

3 thoughts on “Bullshitting about bullshit jobs”